Port Adelaide Pubs reflect the area’s maritime history in catering to the sailors of trading ships. The earliest recorded was the Port Hotel. It opened in 1838, two years before the port was officially declared. 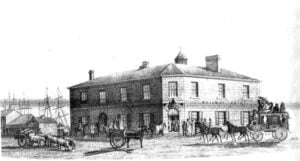 On the left is an illustration of the original Railway Hotel of 1850, later renamed the Port Admiral, which is still standing but no longer operating. On the right is an etching of the British Hotel of 1847 which is still licensed after a period of restoration and several alterations.

Most major ports are arrival points of journey’s end after long periods of sea travel.  The Port of Adelaide, which was proclaimed in 1837, shares this distinction particularly when the first settlers arrived and sought refreshment and relaxation after many months cooped up in small areas below the decks of slow sailing vessels.  As with any port, alcoholic beverages were in demand by the free immigrants from the United Kingdom in those early days.  Port Adelaide Pubs were welcoming arrival points for all who were about to begin a new life in a strange country. Because of the difficulties faced in the selection of a site for a capital city in the newly proclaimed state of South Australia, in 1836 the final decision resulted in a situation where the city and port  were 12 kms apart.  Added to this was the difficulty of access to the original proclaimed site by shipping and the dismal conditions of the tidal swamp surrounding it.  Consequently another port was proclaimed four years later at the site of the present Port Adelaide. It was inevitable that those early arrivals, both immigrants and seamen would seek hospitality in a pub or inn after so many months in cramped, uncomfortable quarters.  Early records are vague but there were two sites known to have catered for the needs of the arrivals.  Both the Ship Inn and the Caledonian Inn were in operation at the time, and probably prior, to the date of 1838 when licences were granted.  Both were probably rough huts because of the lack of building materials and their exact positions are unrecorded, but their licences were closed  in 1842 just a little after the new port was proclaimed in 1840.  A new port demanded work and a flow of shipping and that is just what happened as did an increase in the demand for hospitality and comfort which resulted in an ever-increasing number of hotels. The first hotel at the new site was Port Hotel on North Parade which was licensed to begin operating on March 23, 1839, but was known to have served from October, 1838.  This hotel operated until 1951 when it was closed and demolished to make way for increasing wharf use. 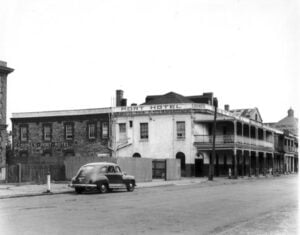 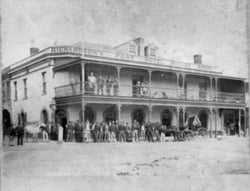 At left is the Port Hotel in the late 1880s and on the right just before it was demolished in 1951.

The Shipwrights Arms at Alberton came next, licensed on the same date but closed in 1876.  There was an interesting range of names over the next few years, some of short duration and the results of name changes, ranging through Help Me Through The Years (changing to the Ship Inn in 1840), Cross Knights, Prince Albert, Red Cross Knights, Commercial, Steamboat, The Hen And Chickens (all in 1841), and the Jolly Tar.  Of all the names only the Commercial still operates today. The Port Adelaide district is large and a few of the hotel were situated in surrounding districts but to continue numerically listing the openings: the British Hotel (1847) still operates  and is followed by Coromandel Inn, Golden Phoenix, Railway Hotel, Albert Hotel, Britannia Hotel (1850 and still serving after two name changes), and the Pier Hotel. These were followed by the Carpenter’s Arms, Prince’s, Prince of Wales, Watermen’s Arms, Port Admiral, Semaphore, White Horse Cellars, Verge, Wharf, Shipwright’s at Birkenhead, Lefevre, British Volunteer, and North Arm. At the turn of the century in 1900 the list continued with the Wharf Dock, Sailor’s Return, Lass O’Gowrie, Portland, Railway, White Hart, white Swan, Exchange (later the Lighthouse), Bridgewater, Old Fairlop, Duke of Wellington, Lord Exmouth, British Standard, Glanville, Globe, Australia’s Pride, Jetty, Sussex, and Duke of Edinburgh. New openings and name changes continued with the Thistle Inn, Australian Clubhouse, Cumberland, Gasworks, Kent, Thornton, Family, Brunswick Pier, Royal Arms, Alberton, Birkenhead, Ethelton, Kew, Livingstone Arms, Prince Alfred, Royal Oak, Black Diamond, Exeter and Criterion. Port Adelaide Pubs names reflect the origin of the settlers displaying a distinct British background.  However there was an emerging trend to name the hotels after local districts, although these too displayed an English parentage. The Jervois Hotel, named in 1909, chooses the name of the peninsula on the opposite bank to Port Adelaide, while The Rosewater is named after an adjacent village. The Paris, Scotch Thistle, Central, Colac, Dock and Newmarket all opened in the Port and return to their English roots. The range of names covers over 75 establishments and, by 1906 with the rising power of the Temperance Movement, local Option Polls were held in six districts to determine the public’s wishes regarding the reduction or not of the number of hotel licenses.(Incidentally the Port had a premises named the Temperance Hotel which was just that – it served no liquors).  The vote supported the reduction of licenses and one third of the number were ordered to close.  Of the 45 licensed premises in Port Adelaide at the time 15 were closed.   New licenses were issued in surrounding areas as the districts expanded.  The Flinders, the Osborne, the Leg Trap among them, and with a return to unusual names, Wee Willie’s Tavern being a more recent addition.  There has been a trend away from the formal hotel names of the past to the almost nick-names of today with The Prince (from Prince Of wales) The Ex (from The Exeter) and the Rosy (from The Rosewater) as a sample.

While any list of Port Adelaide Pubs  is hardly exciting it does display the growth from a struggling colonial settlement, through a swiftly growing industrial district, to a prideful City and part of a recognised nation and the recognition of the fact that just as those early arrivals searched for refreshment and relaxation so too are the citizens of the present utilising the hotels as an important part of a successful modern community. 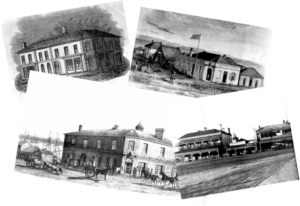 Pictured above are some early views of some of the well-known Port Adelaide holsteries.

From left to right; The White Horse Inn, The British Hotel, The Railway Hotel (later the Port Admiral), and the Exchange Hotel in its original position before being moved back to make room for wharf alignment.